How To Make A Pallet Herb Garden

This post includes affiliate links. If you decide to make a purchase through my link, I might get a small commission for it at no additional cost to you. Thank you for supporting Wooden Pallet Projects! 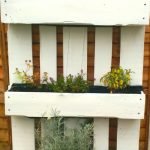 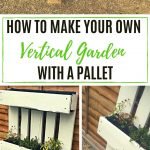 My husband is a chef and loves cooking so we always have some fresh herbs on our kitchen windowsill. The downside is that they die pretty quickly. So I came up with this idea of a herb garden I could put outdoors and after some research online I’ve picked the one I really liked. But…

Days went by and I struggled to find time to do it. But after a couple of weeks, I finally managed to take a pallet out of my garage and started disassembling it. It was a nice, sunny day until it started raining…

Enough said I have finally managed to finish my pallet herb garden project and after several obstacles( like running out of staples, buying ones I couldn’t use and breaking a drill) it’s ready and I’m very pleased. So here it is Pallet Garden Ideas Part 1 – How to Make A Herb Garden tutorial.

First of all, I needed to remove the bottom planks and get rid of these blocks made of wood shavings. I planned to change them to wooden blocks because they look better and would have been better/easier to paint.

So after doing so, I was left with a base for my herb garden with the nails sticking out. I was going to reuse them to attach the new wooden blocks so I left them in for that moment. However, I got rid of the ones from the middle plank (red arrow). I used new, shorter nails instead of the old ones so the plank was still attached.

From the planks I’d removed, I only left the wider one that I was going to use. So the final result was:

I had a main base left from a euro pallet. I had 2 same width planks left from my first project and 1 plank from this dismantled pallet.

Changing The Wooden Blocks, Cutting Planks To Size And Sanding

My husband volunteered to cut the blocks and planks for me :) and showed me how to properly hammer nails and not bend them in the process. This sped up things a bit, but fear not the project was no near finish at the end of that day.

The next step was to remove the old nails. I chose the most straight ones and gave them a few strokes with sandpaper to remove rust. Then with help from my other half, I nailed the new wooden blocks in place. It’d be much easier and faster if I had a nail gun, though. The best nail gun for DIY is the one that is the easiest to use and speeds up the whole assembling process.

With that done I could move on to sanding. I was only going to sand it once on each side with P-60 grit sandpaper to remove dirt and smooth it out a bit. More sanding wasn’t really necessary as I was going to paint it in the end.

I’d chosen a white paint color mainly because I thought the green of the herbs would look very nice against it. And indeed, it looks very nice :)

I had not given much thought to the paint itself. As long as it was wood paint for outdoors it was fine.

The first layer of paint was drunk by the wood as was the second one. Using a white primer would solve this issue but I didn’t have anything at hand.

I tried to cover every single hole and crack to make sure water won’t get inside. Next time, I’ll just get the wood filler. Well, you always learn something new, aren’t you?

As you can imagine I only got one paint tin and as it wasn’t enough I needed to get another one but, unfortunately, they run out in the store I got it from. So a trip to town was in order to get some more paint.

Luckily enough the second tin of paint was much nicer, thicker and super white. Two more coats later and my project started to look how I wanted it to :)

The thing is with painting it takes time. Every coat of paint has to dry at least 24 hours before applying the next one. So the painting itself took me several days in total to achieve desired results.

How to keep dirt inside the pallet planters

There are several ways to do it.

The first one is to use some kind of weed control fabric as I did. This is the most flexible solution as you can measure and cut it to the desired size.

The second way would be to buy plastic plant containers but you have to make sure they will fit and you’d need to support them from underneath.

The last solution is to use coconut planter liners. It’s a natural and eco-friendly one. It’s also cheap, and you would be able to cut the liners to fit your project as well.

So the time for assembling my herb garden finally came:) I put the pallet on the grass and measured to know how much of the weed fabric I’ll need to form some sort of pocket. The way I chose to do it doesn’t include any wood bottom for each shelf holding soil and herbs, so it’s less drilling and screwing.

I thought I’d give it a go first and if that solution didn’t work then I probably will make wooden bottoms.

You ask why bother with a fabric in the first place and not just use only the planks? The reason is that I didn’t want the wood to have direct contact with wet soil even if it’s painted.

The second reason is exactly that. I didn’ want the painted wood to be in direct contact with soil which I’m going to put eating herbs in.

You never know if some of the paint won’t get into the soil. I’m not sure if it’s going to work 100% but this way the chances are smaller that it will.

I decided to double up the fabric layer because it seemed a bit thin to me. It really depends on what fabric you’re going to use.

Then I smoothed it out as you can see in the picture. Underneath it, I put one of the short planks “face down”(the side you wanted to be outside/visible went on the ground). I stapled the fabric along the edges of both planks. You can staple it whenever you like just to secure it in place.

The next step was to pick up the plank and put it on top of the wooden blocks so the fabric goes inside the “pocket”. Just make sure you are happy with how the fabric is placed/stapled.

Now the drilling. You can use nails and hammer them, but I didn’t want to take any chances that my blocks will split. So size 4 wooden drill did the trick, however, I manage to break it :)

I drilled two holes in each block and put two screws in. All that holds the plank nicely in place. You just have to repeat the whole process with the other two planks.

And that’s it! Now the herb garden is ready for some soil and herbs.

I hope you liked my step by step tutorial. If something is not clear feel free to leave a comment or drop me a line via contact page :) And don’t forget to pin it to your pallet projects board! 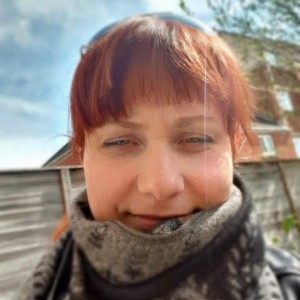 Kasia is the owner of the Wooden Pallet Projects. She's a DIY/upcycling enthusiast. If she's not painting, sanding, or drilling, she's writing about power tools or tips for various DIY and upcycling projects that make the creative process easier and more fun!
PrevPrevious
NextNext

10 thoughts on “How To Make A Pallet Herb Garden” 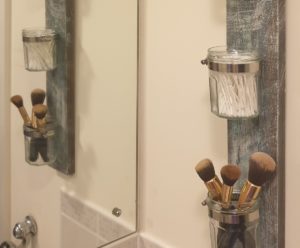 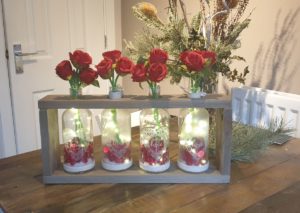 7 Awesome DIY Valentine’s Gifts for Him 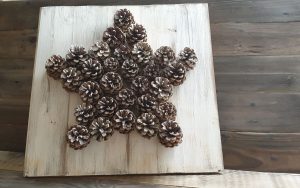 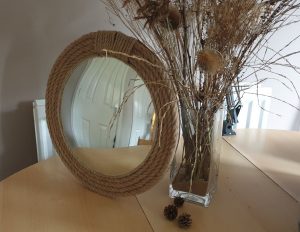 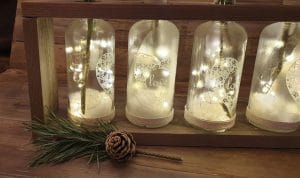 Disclaimer: While every effort has been made to ensure the accuracy & effectiveness of the information displayed on this website, WoodenPalletProjects.com makes no guarantee as to the procedures & information contained here.

The publisher will not be liable for direct, indirect, incidental, or consequential damages in connection with/or arising from the use of the information displayed on WoodenPalletProjects.com.

I love it when you share  my ideas however please keep in mind all images all text on this site are property of Wooden Pallet Projects unless otherwise stated. Feel free to use one photo(exluding any tall Pinterest images) for any roundup posts, provided that a  link back(dofollow) to my original post is included. Please do not remove any watermarks, crop or edit any of my images without obtaining written permission from me.

WoodenPalletProjects.com is a participant in the Amazon Services LLC Associates Program, an affiliate advertising program designed to provide a means for us to earn fees by linking to Amazon.com and affiliated sites.

As an Amazon Associate I earn from qualifying purchases.

Send this to a friend